About the Dads
A simple idea born of fatherhood, friendship and music has flourished and taken shape.

THE BAD DAD ORCHESTRA, formed in mid-2015 from a concept devised by the bands late guitarist Liam Guthrie, evolved quickly into a powerhouse combination of some of Tasmania’s premiere contemporary musicians.

A traditional line-up with; vocals, electric guitars, bass guitar, drum kit, Hammond organ & a 3-piece horn section (tenor sax, trumpet, trombone). Big grooves, snappy horn lines and catchy as hell vocals. Critics have likened THE BAD DAD ORCHESTRA to the classic sounds of Australian pub-rock with a modern twist, whilst others have named it a unique brand of soul.

Since establishing, THE BAD DAD ORCHESTRA have featured on some of Tasmania’s most popular festival line-ups, including: Falls Festival, Party in the Paddock, Forth Valley Blues Festival, Junction Arts Festival, The Taste of Tasmania, Royal Eve, Festivale, The Great Huon Valley Festival, Bruny Island Blues & Roots Festival - and many more.

THE BAD DAD ORCHESTRA is beginning to receive National attention, after the 2018 MOJO BURNING (QLD) and two separate EP tour's (2018 and 2019) across QLD, NSW, VIC, SA and TAS; with interstate festivals at BLUES ON BROADBEACH (May 2019) & CALOUNDRA MUSIC FESTIVAL (October 2019).

THE BAD DAD ORCHESTRA also have a strong work ethic when it comes to writing and recording music; having recently released their 3rd EP in as many years. These 3 EPs have received extensive community radio and ABC regional radio airplay across Australia and New Zealand.

With a number of SOLD OUT shows under their belt, festival bookings and plans to record their debut album, these 9 Tasmanian Dads show no signs of slowing down anytime soon.

“Calling it early: The Bad Dad Orchestra are the band to beat today at Party in the Paddock. Absolutely killing it on the main stage.”
Britt Andrews, Amnplify - 11/02/17.

“Brace yourself for the Bad Dad Orchestra.”
Caroline Gladstone, The Australian - 13/02/18. 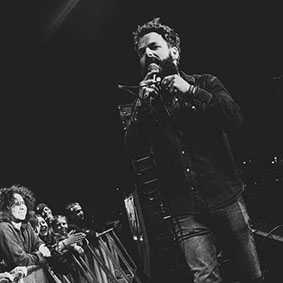 Jimi is the vocals. He has a voice that is to be reckoned with. A true showman on stage and a true lyricist that gives energy time after time. Some say his voice has more power than a Datsun 180b. Watch him live and you'll be hard pressed to be distracted. 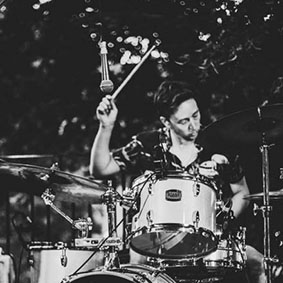 Luke is the drummer, one of the finest you will find. A true beat-smith. Tighter than a pop rivet pressed through high grade aeroplane steel. He keeps the grooves timeless and seamless and has a sixth sense of how the music should be played. A true spirit of the beat. 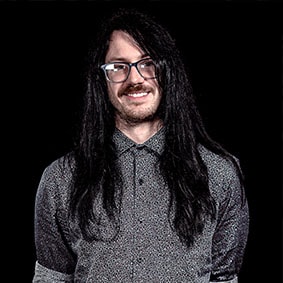 Levi is a loving soul and backs it up with a talent on the ivories that is perfectly infectious for our sound. His style is second to none and he knows how to shop for boots. He fits in well with us, is totally a bloody legend and we are very proud to welcome him into the family. He can spin a spanner, take a donk apart and get an old 57 triumph going but he is gentle and kind. A man with a great smile and soothing vibe, He’s the sorta dad we need right now, and we just bloody love him. 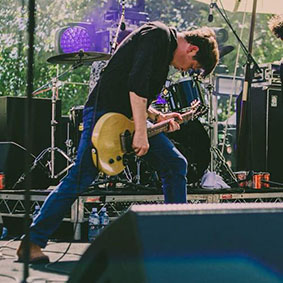 Carl is a lead guitarist, a songwriter and a true showman. A high kick to be reckoned with, he's sure to bring energy and heat when he graces the masses. A 110 percenter every gig, every rehearsal. This guy lives for music.

Mally is all about guitar, precise, accurate and immerses himself within every note. He plays with moustache and he plays it like his last stand. A solid performer with fingers like a gunslinger from the wild west. 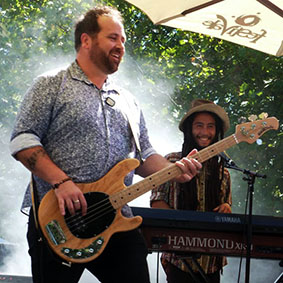 Vince plays the bass, he feels the bass, he is the bass. The bottom end of the spectrum where the subs sit. His uncanny ability to bring light and shade through his playing is infectious to the sound. He’s big, he's bass, he is bad. An unconventional player with a colossal passion for the band. 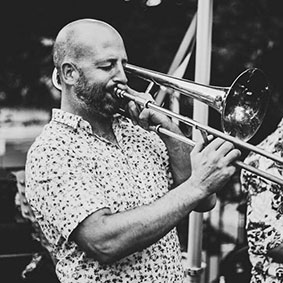 Chris is the bone. The bottom of the top. A stiff sense of the trombone that has mastered this art, more like a ninja of the brass. He is smooth through the notes, fast and precise. A backbone in the horn section that is deep inside the grooves.

Shaun plays the trumpet. A big band brother. He could blow a hole through concrete with his lips. He has chops and he has tone. The top end of the horns, he brings it all into perspective. He plays it how it's meant to be played and he plays it with swagger and stab. 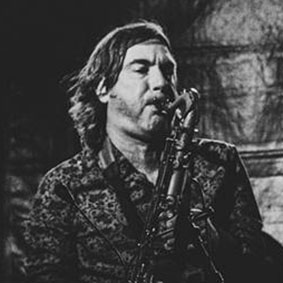 Carl is a master of the sax. A sexual airwave. His abilities are world class in the wind business. He blows a hard solo and backs it up with presence and form. A force in the band that is subtle yet forthcoming when the space opens up. A veteran of the saxophone he's a real man, a real player. 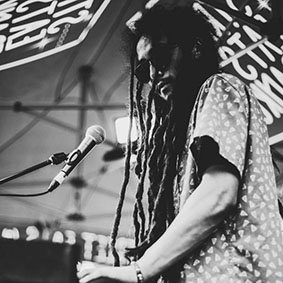 Elliott Courtnage was a founding member of the Bad Dads. He left at the start of 2020. Good luck Elliott, you are a beautiful soul.

Elliot plays the keys. He sweetens up the melodies with a total control that can only be described as subconscious. He’s not your average keyboard player. He is vibrant and boasts a mean-arse solo. A gifted musician and one of the best souls gracing the ebony and ivory. 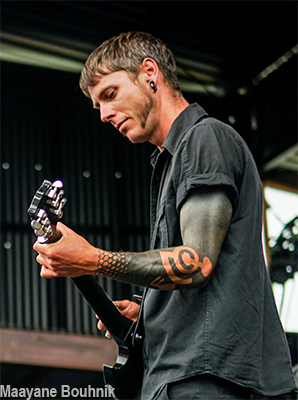 During 2017, with extremely heavy hearts, we said goodbye to Liam Guthrie Ingram Pennicott. He was our founder and our heart that pumped brotherhood, insight, pure brilliance and most of all friendship into our band. He is wholeheartedly and completely irreplaceable and is truly an energy that we will have with us always. He had spark he had magic and he was a force to be reckoned with. Most of all, we love Liam and always will.

Liam is a songbird, an exceptional man of many shades. A backbone guitarist and a voice to backup the hysteria. He’s a solid and true player with showmanship on stage is one that's remembered and one that's unique.
1983 - 2017